Ten years after Richard’s untimely death at 44 years old, very few people currently at WMH worked alongside him. Yet, remarkably, his influence on the business remains very strong. WMH’s positioning, attitude and behaviour all derived from him and continue to course through the veins of the company today.

I have never encountered anyone so confident in their own views and as keen to dominate proceedings as Richard Murray. It was his clarity of thought that gave WMH its provocative stance – a simple extension of his personal beliefs that marketing and design had become moribund and unoriginal and needed goading.

To him, we were shooting at an open goal and it should have been easy to make a success of things. It was not, for the simple reason that most people in marketing are surprisingly risk averse. Richard railed loudly at the failure of other firms to create ground breaking work and readily walked away from clients who didn’t share our views. For a start-up business, this was wonderful stuff, because it gave us a common enemy – lazy thinking. Some thought we were arrogant, some cultish, but we didn’t care we, and particularly Richard, knew we were right.

In the ever more complex world of branding, it was good old packaging design that Richard held closest to his heart. Whilst other agencies, once established, moved swiftly into the more lucrative corporate identity world or focused on ‘digital’, Richard believed you could still command most fame through packaging design and it was fame that Richard sought for us. Packaging also connected him to the audience that he was most comfortable with everyday people, going about their everyday lives. ‘Big Brother’ and tabloid newspapers were what fascinated him, not the ‘C-Suite’.

Whilst kind and, on occasions, immensely caring, Richard would be the first to declare himself ‘difficult’ to work with, indeed he would be proud of the moniker. In his world, there was little worse in life than being beige. Chipped cups were publicly dropped onto the concrete floor, accountants and architects roasted for sloppy thinking or missing the brief. It did not stop people admiring him – you were never in doubt where you stood with Richard Murray.

He could be immensely funny. He had the wit and delivery to make a good stand-up comedian and, at one time, nurtured thoughts of a one-man show. Company drinks and Christmas parties always saw him centre stage, as did awards ceremonies, as long as we had won. If we hadn’t, he cleared off quickly, trailing a stream of invective behind him.

I always thought Richard was a designer manqué. He loved design and peoples’ reactions to it and, of course, he was obsessed with big ideas. He held designers in awe. Everyone else, including him, was there to serve them and, in turn, he commanded huge respect from them.

Like so many brilliant people (and Richard was brilliant) he was loved and feared equally. Clients didn’t get special treatment. He’d still show up an hour late for their most important meetings, tell them they were being lazy or he’d stop the meeting until they put their phones away. It just reinforced the message that this larger than life character was different to all the rest and he was.

Richard was a complex and endearingly funny man who had the remarkable power to make complicated things frighteningly simple. I am indebted to him for a helter skelter ride that I’d never have wanted to miss. 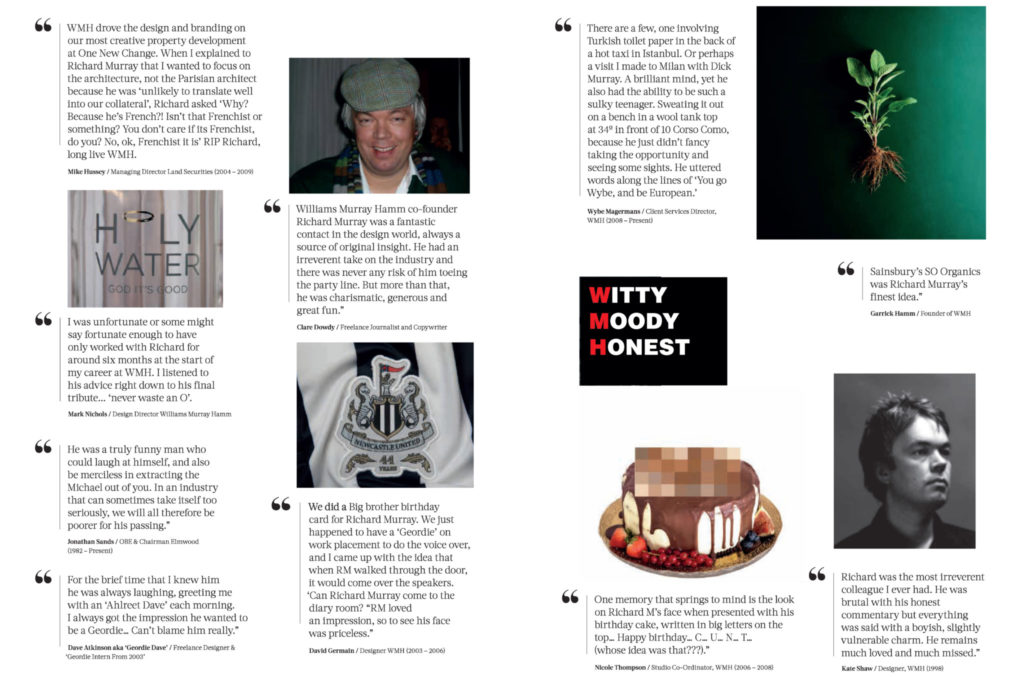